skip to main | skip to sidebar

This past year has been an amazing yet trying year. My fiancé's family came over from Europe to meet my family. We were able to celebrate our engagement in Sweden and on American shores. I got to fish for crayfish and cook a feast with them using the traditional Swedish recipe. I started roller derby this year and subsequently injured myself (doing phsyical therapy now, ugh). It was one of the first years I didn't move apartments. I got to watch one of my best friends get married. I participated in several gallery shows (including my first overseas shows!) and attended my first comic con in New York. I travelled A LOT. I was able to mentor some teenagers at work (am I a grown-up now?).

A friend is creating a dress for me (the design is very Sailor Moon from the back - not a coincidence). Another incredibly talented friend Katie Blauer is designing my shoes. I've designed the Save the Dates, and I'm looking forward to creating some fun and quirky invitations and favors and fun things for our guests.

They say wedding planning takes over your life : MY BODY IS READY. 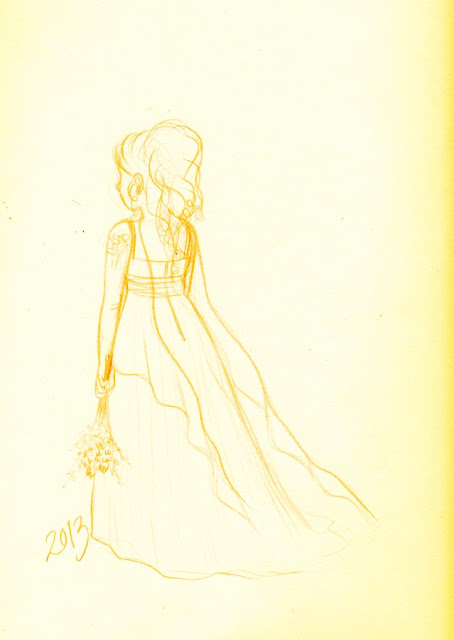 Happy 2013, followers. Thank you for sticking with me for another year.
Posted by Allison Bamcat at 12:18 PM 1 comments

Wedding Invitations for the D'Angelo-Earlys

Last weekend I was a witness for one of my best friend's weddings. The ceremony was short and sweet with lots of laughter and none of the rigidness that I've come to expect from weddings. It was heartfelt (I criiiiied), wonderful, and in a beautiful location we're both very close to.


Shteppé D'Angelo is a friend I've known since I was 11. Her name is originally Stephanie, but more than a decade of inside jokes has led my family and all of my present friends to refer to her as Shtep.


Shtep and I met in middle school on our first day of 7th grade. We were the new kids in class. I was moving from Los Angeles, and she was moving from another town in the south shore of MA. Basically, two guidance counselors pushed us together and said, "MAKE FRIENDS!"

Shtep was wearing a black snake skin vest with matching flared pants and an Axel Rose bandana across her forehead. I was wearing silver leopard print pants, a poofy vest and a bucket hat. The first thing I said to her was, "I like your pants." And our fate as friends was sealed from there.


I'm not exaggerating when I say I feel that her husband, Chris, is the perfect person for her. We've seen much of each others' lives (including some lame ex-boyfriends on both counts), and I have no doubt that they're meant to be together. It's already been years! I'm not worried about them at all.

I designed their invitation, and they wanted to go with an old school video game style. The significance of the Mario/Princess Peach spin-off is that they met while he was the manager of a video game store. They're both super nerdy gamer nuts (tattoos included), and they have such a blast together. They were really happy with how they came out, and that's all that matters to me. I made them a special poster too for guests to sign at the reception.

Congrats to them both, and thank you for including me for such a special day.
Love you both.
Posted by Allison Bamcat at 2:09 PM 3 comments

Punching it up a Notch


I work with so many incredibly talented people at Converse. I'm truly lucky to have such a wealth of different skills and talents around me to give/get critique and work on projects I normally wouldn't get to. Recently my coworker Katie Blauer, a super talented and trained eye for footwear of all kinds, asked me to add a little neon to some beautifully-crafted silk flowers for a pair of heels she was making.

I told her I own all the neon paint ever and that this would be no problem.

Katie brought me a beautiful Matthew Williamson dress to use as reference, making note of the unique green and pink orchids printed on the fabric. I picked out about 12 tubes to work with and got settled in my studio on one of the nicest days of the year so far.

And yes, I know what you're thinking: That's a LOT of paint tubes for such a tiny project. But I'm very picky about mixing and creating unique hues. I don't often use any color straight out of the tube. And especially working within the neon spectrum, I wanted to go balls-to-the-wall to enhance these babies.

You can check out more of Katie's work at www.katieblauer.com. I'm pumped to say that she's helping me with my wedding shoes next year!!
Posted by Allison Bamcat at 10:30 AM 0 comments 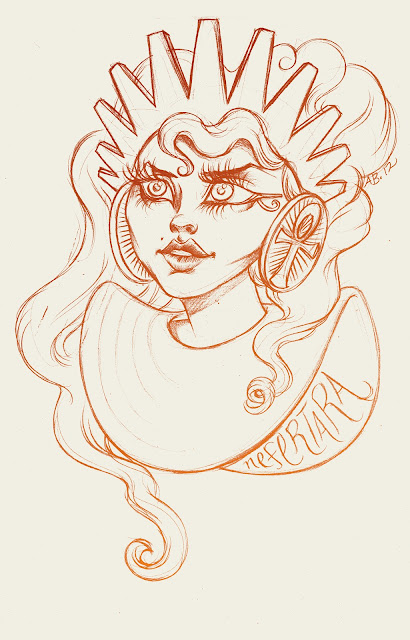 It's been a busy summer so far! I've been working on several projects including cd artwork for the band Oilhead, a piece for a show in London and all sorts of odds and ends projects. I've also been planning my wedding! I can't wait to design the living shit out of it. There are a lot of things I have to keep secret for now, but I'll post them as soon as I can!

But I wanted to post a quick drawing I made of the beautiful Nefertara. She's a sweet, creative, old soul who's been reinventing herself through her alter egos long before Lady Gaga. Probably Elizabeth Taylor in a past life, she never stops making new wigs, costumes, jewelry, eyelashes, and accessories. Check out her site if you get a chance!

Not that I even need to mention how striking her eyes and expression are, but outside of her natural beauty she's not afraid to look strange or grotesque for the sake of art. That's something I can really appreciate and identify with. As artists, we can have so much fun if we let go of our fears of what others may think. I'm still learning how to do that myself.

Nefertara even posted about me on her buzznet page if you want to check it out! Thank you so much! <3

Posted by Allison Bamcat at 11:05 AM 1 comments

Things have been very busy the last few months: Working on an album sleeve for my friend's band, an accessory line for a local clothing company, and I'm in the beginning stages of creating a new body of work centered around "girl culture." It's my first series with any kind of real statement, so I'm excited.

Waiting on some custom laser-cut MDF to come in the mail! Wahhh so excited to see it! Painting on wood is just so aesthetically pleasing to me. <3

But surely I won't leave this post empty-handed. I'm working on a piece for a video-game themed show in London currently, and part of the profits fund Autism research. As well as the show pieces, the other artists and I have agreed to create a separate poster featuring a video game character! I chose Pikachu! For my final piece, I'm going to paint Wario! 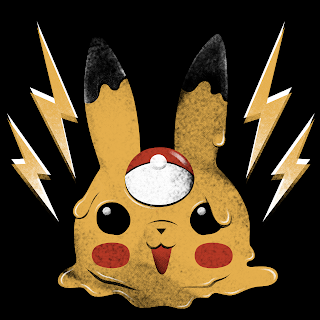 Also, I designed the extra details on these sweet-as-sugar girls shoes, so you should buy them for the creative little ladies you know. 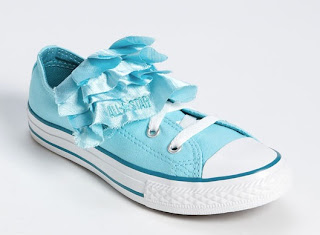 Also, can we just talk about how AWESOME blogspot is now? Uploading pictures and posts was a pain in the ass - so happy they got with the picture and created a multiple upload option. Sweeeeet!
Posted by Allison Bamcat at 2:43 PM 0 comments

I was invited by my supervisor to accompany her to the RISD portfolio reviews, focusing on Class of 2012/13's Illustration and Animation majors. I came as a representative/talent scout for Converse, and I have to say I was blown away by this experience.
RISD is a truly prestigious school (one way out of my league price-wise when I was 16 and heading to college). So many amazing artists have come out of RISD, and I'm grateful to have been apart of such an important experience for students.

My portfolio reviews at Mass Art were truly nerve-wracking. I spent hundreds of dollars printing my portfolio, and even more on my "leave-behinds" (acrylic keychains designed by me and laser-cut with my name and website). Basically you get dressed up and make your portfolio look as dapper as possible and throw yourself at prospective companies, asking for advice and feedback and potential positions at your favorite companies. I had the pleasure of being reviewed by my senior Dana Woulfe for Converse in 2009, where he dismissed my portfolio as being inappropriate for surface design, though he did like my pieces. Funny how things work out - I sit about 15 feet from him now!!

It's only been a short while since I was on the other side of the table, so I was really nervous on arrival - such a big school, so many amazing talented young adults, and sitting eating lunch with all the other company representatives was pretty intense! I couldn't help but think, "OMG I'M NEXT TO PIXAR AND OMG OMG," totally star struck!

The work from the Illustration students we saw (which was around 30) was truly inspiring. I was suprised to see how many students worked in gouache (well), and it was interesting to see the differences between what Mass Art had expected from students versus RISD. (Black and white graphic-less resumes, and almost no postcards!) But overall I was truly blown away by a lot of the work. I even handed out some personal business cards! Why wouldn't I want to keep up with such talented artists?

Overall, this was a great experience for me and hopefully for all the students who attended. I was able to share some of my newly-inherited insight as well as gain some inspiration and a renewed sense of "blossoming" and eagerness from so many fresh faces.

If I were you, I would seriously check out :
Sunny Ren
Leland Goodman
Melanie Steinway
Posted by Allison Bamcat at 10:24 AM 0 comments 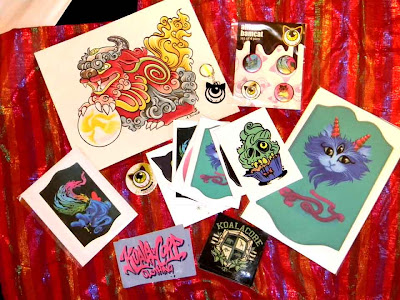 Here’s how it works : Add me to your friends on facebook, comment on this photo with your FAVORITE dessert - it doesn’t matter what it is, and you’ll be in the running to win this ENTIRE LOT of fabulous stuff! Includes 6” x 10” print, mini print pack of 7, eyeball kitty keychain, button set of 4, greeting card, sticker, KoalaCore stickers, and an ORIGINAL PIECE OF ART - a sweet fu dog I drew, inked and finished with markers.

Winner will be picked at random on Monday! Get on it! <3
Posted by Allison Bamcat at 11:46 AM 0 comments

Allison Bamcat
Boston, Massachusetts, United States
Allison Bamcat is a Boston illustrator with an affinity for confectionary and phantoms. Bamcat studied at the Massachusetts College of Art and Design and received her BFA in Illustration. She is currently working as a footwear designer at Converse. All artwork unless otherwise noted is ©Allison "Bamcat" Bamford 2009 - 2012.